On the 7th of August 2018 the Western Cape Province, the City of Cape Town , Wesgro and other supporting  partners officially announced the launch of the inaugural Africa Halal Week  2018, scheduled to take place between 15 to 17 October.

The Africa Halal Week will foster business linkages and  conversations as well as highlight opportunities spanning across sectors  including Tourism, Trade, Investment, Islamic Banking, Fashion, and Film and  Media Promotion, Fashion, Cuisine, Investment and Trade opportunities in SA and  Africa. 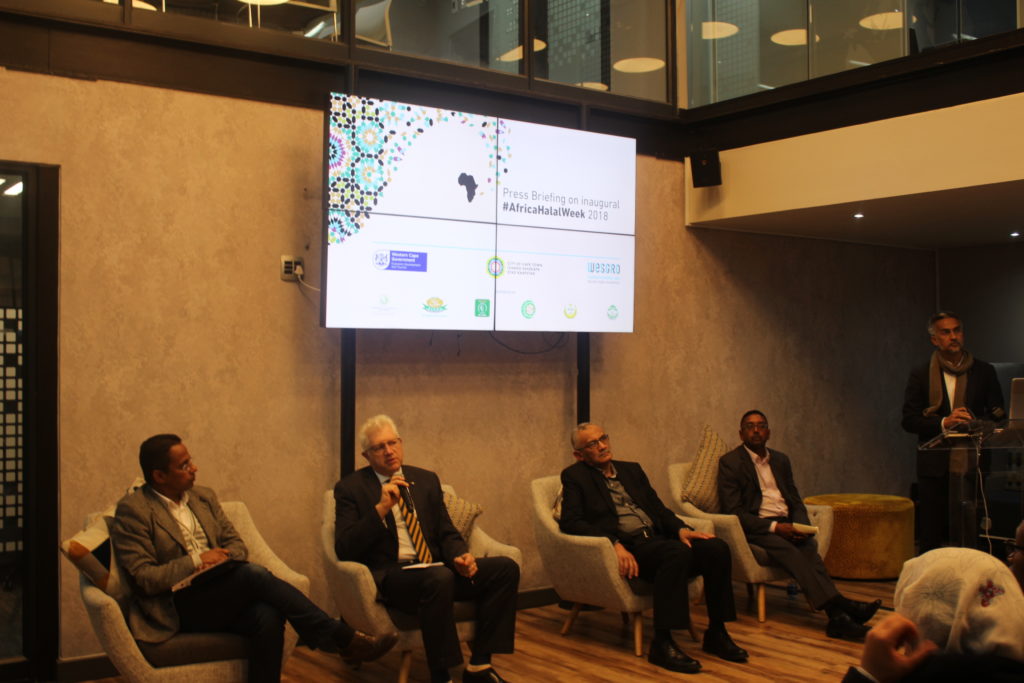 The key events taking place include:

To date, 40 international buyers, CEOs and key opinion  leaders operating in the global halal industry will be participating in the  Africa Halal Week.

Minister of Economic Opportunities, Alan Winde, addressed  media about the conceptualisation of Project Khulisa – which set out to create  new jobs in the tourism and agri-processing sectors. Since 2015, a key  initiative under the project has been to grow the Western Cape’s share of the  Halal market from less than 1% to 2%.

Minister Winde commented: “We’ve grown the Halal Market by  over R900 million since 2015. Under Project Khulisa, the Western Cape alone is  responsible for exporting over R10 billion in Halal products. We look forward  to nurturing this already lucrative market to see it expand even further within  the province, creating much needed jobs and boosting the Cape’s economy.”

Expanding on the importance of creating a week dedicated to  growing the Halal industry in the province Rashid Toefy, Deputy Director  General of the Department of Economic Development and Tourism (DEDAT) ,  commented: “The role of Africa Halal Week is to put Cape Town and the Western  Cape on the map as a preferred Halal trading partner. The province is perfectly  positioned, with frequent and direct flights into the rest of Africa, to become  a hub for Halal on the continent, and a launch pad for international partners  to access the African markets.”

Growing double the rate of the non-Muslim world, it is  predicted that the global Muslim population will equate to 31% of the world’s  total population by 2060. Honing in on how the Halal market is so much more  than food products containing a Halal verification stamp, Professor Ebrahim  Arnold – Chairperson of the Interim Halal Co-ordinating Committee  said:

“Africa Halal Week is an opportunity for every one of all  persuasions to visit the Western Cape, and be encapsulated by the more than 300  years history of the impact of Halal living. With the ever-growing population  of Muslims globally, the opportunities for the industry abound. Cape Town  boasts the first Halal certification process in the industry and is supported  by Halal certifiers who are seriously striving towards maintaining Global  Standards for Halal processes.”

Wesgro’s International Trade Unit and DEDAT have been  working closely with stakeholders such as the Halal Co-Ordinating Committee,  Halal Certification Bodies, Export Councils and the private sector to make the  event a reality.

Highlighting the importance of Halal in other sectors –  Wesgro CEO Tim Harris, referenced the  Mastercard Halal Trip Muslim Millennial Travel  Report 2017 research, that projects that the total expenditure from Muslim  millennial travellers alone will surpass US$100 billion by 2025, while the  overall Muslim travel segment is estimated to reach US$300 billion by 2026.

“Our province is rich in history, across a multitude of  religions, ethnic groups and cultures. Halal is one of the threads that reveals  the tolerance of our city as well as our capabilities in delivering on the  requirements of this sector. We are perfectly positioned at the Southern tip of  Africa to tap into this growing consumer base and increase our capacity in the  Halal supply chain, with the goal of growing the Cape’s Halal Market share,”  concluded Harris.

The long-term aim of this project is to position the Western  Cape and SA as an important trading hub for Africa. To this end, it is hoped  that the Africa Halal Week will grow and become a key trade platform on the  international calendar.